By Diego Golombek on July 30, 2019 in Clocks in the Spotlight 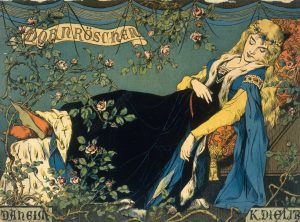 Works of literature describe in the guise of fiction the dense specificity of personal experience
David Lodge, Consciousness and the novel

Sleep, those little slices of death — how I loathe them.
Edgar Allan Poe

What hath night to do with sleep?
John Milton, Paradise Lost

Sleep is one of the most approached topics in fiction literature of all times. There are even academic studies of sleep and novels (see Greaney, M. Sleep and the novel. Palgrave Macmillan, 2018). To sleep, perchance to dream… and all that. Well, there are also studies of sleep in Disney film characters, so there’s nothing to be surprised with here. But other than sleep itself, writers have always been fascinated by the rhythms of humans and nature in general. They have even been prophetic with some of the discoveries that would come in later years. Take Julio Cortázar, for example, who foresaw that “Time enters through the eyes; everybody knows that”… This came more than a decade before the central circadian clock was discovered by clever experiments which followed the visual pathway from the eyes into the hypothalamus, under the premise that, wherever that elusive clock was, it should receive light input. Another example depicts the changes in subjective time estimation we might experience during the night, beautifully described in Haruki Murakami’s After dark: “Time moves in its own special way in the middle of the night”. Going to classical titles, we could also consider Jules Verne’s “Around the world in 80 days” as a prequel to the circadian disruptions to be suffered by frequent travelers that cross time zones and lose track of time. Indeed, Jorge Luis Borges imagines a garden with “an infinite series of times, in a dizzily growing, ever spreading network of diverging, converging and parallel times. This web of time – the strands of which approach one another, bifurcate, intersect or ignore each other through the centuries – embraces every possibility”. Would that be a metaphor for multiple circadian oscillators underlying entrained and desynchronized biological rhythms?

But nobody got it nearly as right as Ursula LeGuin in “The dispossessed” [1]:

Time goes in cycles, as well as in a line. A planet revolving: you see? One cycle, one orbit around the sun, is a year, isn’t it? And two orbits, two years, and so on. One can count the orbits endlessly – an observer can. Indeed such a system is how we count time. It constitutes the time-teller, the clock. But within the system, the cycle, where is time? Where is beginning or end? Infinite repetition is an atemporal process. It must be compared, referred to some other cyclic or noncyclic process, to be seen as temporal.

And yes, you can also read a 250-page novel called “Circadian Rhythm” exhibited in Beijing as an art piece. Go ahead, then tell us what it’s like.

Writers have also invented time, like imagining young Albert Einstein dreaming of different – and fantastic – temporal settings (Einstein’s Dreams, by Alan Lightman) and, of course, H.G. Well’s The time machine – which might very well have been inspired by the chapter on mental time travel in the monumental Principles of Psychology by William James.

There’s even a fiction category: the circadian novels, which fit their actions and characters into a single day. Maybe the best known is James Joyce’s Ulysses, which takes us to a specific day in Dublin, that of June 16, 1904, with plenty of Odyssey details painfully described minute by minute. Maybe inspired by Joyce, Virginia Woolf’s Mrs. Dalloway follows her protagonist along a busy day, seasoned by the hourly bells of the Big Ben. And Saturday, that wonderful novel by Ian McEwan, describes the whole day of a neurosurgeon – complex neurosurgery included. And there are many others, of course, as there are films that compress 24 hours into a palatable movie.

We can also take a look at writer’s habits to find some… unusual ways of coping with circadian rhythms. When writing is a second career, it definitely works against a regular sleep-wake cycle. In one of Maria Popova’s fascinating “Brain Pickings” newsletter, she examines the daily routines of famous writers: a feast for the circadian biologist. Ray Bradbury “found a basement typing room in UCLA where, if you inserted ten cents into the typewriter, you could buy thirty minutes of typing time”; yes, a basement room during the day – perfect for photic stimulation of the biological clock! Jack Kerouac had a fixation with candles and moonlight – maybe analog to primitive entrainment of circadian rhythms? Ernest Hemingway’s would write while standing next to a tall desk “every morning, as soon after first light as possible”. But maybe the best was Ben Franklin with his amazing daily journal, in which every hour of the day had its exact purpose, from 5 am to 10 pm. Lark-wise Haruki Murakami also rises at 4 am and works in his novels for a few hours before running and swimming (and yes, we can be quite jealous about his routine).

The art of writing creates the universe. A rhythmic universe.

Footnotes:
[1]   I am grateful to Dr. Elizabeth Klerman for the Le Guin quote.