By Erik Musiek on January 31, 2021 in Clocks in the Spotlight 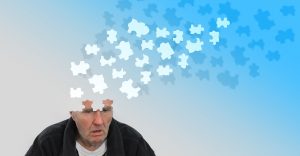 To many people, one of the most dreaded consequences of living to an old age is Alzheimer’s Disease (AD). The older we get, the higher our risk of developing AD. Indeed, nearly half of all people that live past 85 years old have some degree of AD. AD is the most common cause of memory and thinking impairment in older people, and is a progressive, fatal disease for which we currently have no cure. One of the common symptoms of AD is disrupted sleep-wake patterns and changes in 24-hour activity patterns. Recent research suggests that changes in daily rhythms and sleep may in turn increase risk of AD. Here we will discuss how AD causes changes in daily rhythms and the circadian clock, as well as the idea that changes in these rhythms may increase the risk of AD.

It has been known for many years that many people with AD have disrupted sleep-wake and activity rhythms. AD patients tend to wake up more often and be more active during the night, and nap more during the day, which we refer to as fragmentation of the day-night activity pattern. AD patients also tend to have a peak of activity later in the evening than most people, and this is often a time of increased confusion and agitation.  This is termed “sundowning”, and it can be a major problem in AD.  These changes in day-night activity pattern and sundowning are likely caused, at least in part, by degeneration of the circadian clock system. Studies of the brains of donors who died from AD have shown that some of the key brain areas that regulate sleep and circadian rhythms, such as the suprachiasmatic nucleus, show signs of degeneration, though we do not know how early in the disease course this degeneration occurs.

AD is thought to be caused by the accumulation of abnormal proteins in the brain, termed amyloid plaques. Amyloid plaques are formed from accumulations of amyloid-beta protein and are present in the brain of AD patients 10-20 years before they develop any memory problems.  Thus there is a long period of time during which the early brain changes of AD are present, but the person is still asymptomatic. Interestingly, during the time, asymptomatic people with these AD brain changes begin to show subtle alterations in their daily rhythms and sleep patterns, including fragmentation of the day-night activity pattern, poor sleep at night, and increased daytime napping. Thus, these changes to the circadian system seem to happen very early in the disease process in AD.

Can disrupted sleep and circadian rhythms increase your risk of developing AD?

While the data that brain degeneration in AD can cause sleep and daily rhythm disturbances is clear, there is also some evidence that sleep and rhythm disturbances may actually contribute to the risk of AD. In mice, circadian rhythm disruption can increase the accumulation of amyloid plaques. In mice and humans, there is a clear diurnal rhythm in the levels of amyloid protein in the brain and spinal fluid, and sleep deprivation can increase the levels of amyloid plaques in mice  and amyloid-beta protein in human spinal fluid. Sleep may increase the ability of the brain to clear toxic waste products, such as amyloid protein, from the brain.  Disruption of the circadian clock in mice can cause inflammation in the brain, which may also contribute to AD. While a causative role for daily rhythm disruption and sleep disturbance has not yet been fully proven, there is great interest in the idea that improving sleep and daily rhythms might be a way to stave off AD.

About the author: Erik Musiek (@ErikMusiek) is an Associate Professor of Neurology at Washington University in St. Louis and co-director of the Center On Biological Rhythms And Sleep. His lab is focused on understanding how circadian clocks influence brain inflammation and neurodegenerative diseases. He is also a member of the Knight Alzheimer’s Disease Research Center and a neurologist with a specialty in dementia.