By David Hazlerigg & Shona Wood on December 20, 2020 in Clocks in the Spotlight

…..or should that be ‘Arctic’? So here I am at 5pm failing to get work done in my Tromsø office (69N). It is dark outside and has been for what seems like forever. I last saw the Sun on 20th November, and now, on a good day, a blueish orange pinky glow over the hills to the south is all I get….on a good day. On a bad day, like many have been lately, there is persistent cloud and dark grey grimness for two hours around midday. 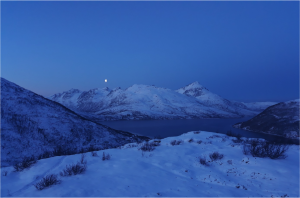 My circadian clock? Don’t talk to me about circadian; don’t talk to me about light therapy with lumi-lights, or whatever they are called. I try, I really do, but my day starts shattered and failing to get up, with brief lucidity in the midday hours, followed by an overwhelming need to snooze in the afternoon, and then wide awake and buzzing until the wee small hours. Eyes like piss holes in the snow, and no hope for improvements for another month yet. 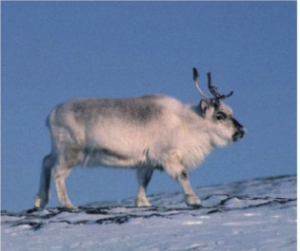 Christmas is looming, and I start to wonder about Rudolf and his friends and their mysterious ability to fly all around the world grinning with bonhomie,  delivering prezzies across all time-zones with no mention of (anti)social jetlag (sleigh-lag) or chronodisruption. Did Santa breed his reindeer to be clockless beasts, I wonder. Circadianly clockless at least – circannual and ultradian they surely are (learn the meaning of these terms here). Perhaps this is what motivates recent genome surveys of Rangifer – though to exactly which subspecies of Rangifer Rudolf, Donner, Blitzen – and the others whose names I can’t be bothered to remember – belong has never been made clear. The best guess would be Svalbard reindeer R. tarandus platyrhynchus, snub-nosed, stumpy and thick-bodied, apparently to maximize energy conservation, and possibly more clockless than their mainland counterparts (R. tarandus tarandus) – but doesn’t the same stumpiness make this a flightless reindeer?

No help there from the only year-round resident birds of Svalbard – the feather-footed Svalbard ptarmigan (Lagopus muta hyperborea ) – so adapted to overwintering at 80N that it too gives up flying in the winter, in favour of aerial running as its only escape option…. in the remote eventuality that it is disturbed in the overwintering season. 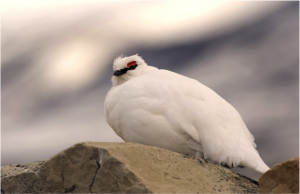 So we humans here in Tromsø struggle on through the polar night cheering ourselves up with ‘mørketidsboller’ – a BLACK iced doughnut to mark the Sun’s departure. Waiting for the ‘solboller’ (more doughnuts) at the end of January when the sun finally returns. Not to mention the lashings of cod liver oil (the famed Møller’s tran) to stave off vitamin D deficiency. But not to worry we are not always so grumpy in the Arctic, we have 3 months of round the clock daylight to look forward to where we can be found climbing mountains at midnight. Freerunning can be fun!

About the authors: David ‘Bah!Humbug!’ Hazlerigg & Shona ‘God Jul’ Wood (@WoodLab_Arctic) work at the department of Arctic and Marine Biology at UiT: The Arctic University of Norway, based in Tromsø, and are members of the Arctic Chronobiology and Physiology research group.