By Jonathan Cedernaes on May 30, 2019 in Clocks in the Spotlight 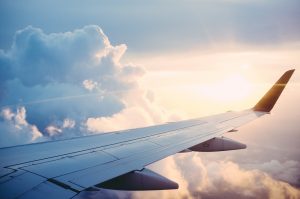 When we travel over multiple time zones within a day, this causes discomfort as our inner biological rhythms become desynchronized – what’s known as “jet lag”. Depending on whether you are going east or west, there are however things you can do to minimize these symptoms – starting days before you leave.

The weekend getaway
You decide to finally take that trip to New York, taking off from London at 5 pm. On the 8-hr crammed flight, your stomach starts feeling upset, you’re dehydrated —  you feel exhausted. You arrive at the hotel at 10 pm local time, two hours after landing. By then you have been awake 18 hours straight and you need more than your usual eight hours of sleep. However, the next morning you wake up at 4 am local time, unable to sleep any longer. Over the next two-three days, you feel hungry early in the day and tired even before the sun has set. To enjoy the company of your friends, you force yourself to stay up until 10 pm, but wake up at 4 am on the second morning, and 5:30 am on the following day. What’s going on?

What is jet lag?
Apart from travel fatigue associated with flying, the above story is a typical experience of what’s known as “jet lag”. This term encompasses the tiredness and other symptoms that arise and persist (“lag”) following long-distance travel that occurs rapidly – primarily by airplane (“jet”) travel – over multiple time zones. The story above involves westward travel, where the traveler has to adjust to a later time zone, suddenly having to eat, sleep, and be active beyond their usual bedtime. Waking up at 4 am the first day may seem early, but it corresponds to 9 am in their usual time zone. Most people experience similar but more pronounced symptoms when they travel eastward, but because the clock now has to be wound forward, sleep issues usually involve difficulties initiating sleep until late at night [1]. Jet lag gets worse with the number of time zones traveled. Other symptoms include poor performance, both cognitive and physical (e.g. athletic performance), and gastrointestinal issues.

Why do we experience jet lag?
Our body’s daily rhythms come from our biological (circadian) clock and evolved in relatively stable environmental light. Over the seasons, dusk and dawn change a few hours, but this change happens over a year, not over a single day. As sunrise signals the “start” of each new day,“pacemaker” cells at the bottom of our brain starts telling the rest of the body to wake up. Our brain also tells our body to be hungry and eat‚ and to be active. This system enables our bodies to process food and optimize energy use and healing when needed. Jet lag occurs during when our body’s biological rhythms try to adjust to a rapid change in time zones – i.e. to a change in external time. In this setting, “desynchrony” can arise, where one body system is able to shift more rapidly, becoming out of sync with another. For example, your sleep/wake cycle will require several days to shift to your new time zone, while your gastrointestinal system will shift more quickly to the new schedule of breakfast, lunch, and dinner. Therefore, adapting to the new time zone involves a gradual shift of our biological clocks at the genetic level across our body until they are in sync with each other and the outside world [2]. This shift occurs faster in the westward than the eastward direction, which explains why it typically is easier to adapt to a later time zone than an earlier one.

How to combat jet lag
Luckily, there are some ways to minimize symptoms of jet lag at the destination:

So when it’s time jet off, make sure your body and mind do not lag behind! Happy travels!