By Alexandra Wharton on January 17, 2021 in Clocks in the Spotlight, Patient Stories 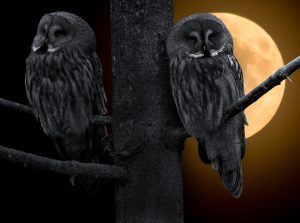 Night owls have organized and our ranks are growing. Groups like the Circadian Sleep Disorders Network and B-Society are advocating for people with late chronotypes – building awareness of flexible work and school schedules, reducing stigma, and increasing federal funding for sleep research.

Late chronotypes (“night owls”) are awake when most people are sleeping for different reasons. Some have a preference or habit for staying up late, some are up to work the night shift, others are biologically predisposed to be most alert and energetic after the sun goes down.

Circadian Rhythm Sleep-Wake Disorders (CRSWDs) – including Delayed Sleep-Wake Phase Disorder (DSWPD) and Non-24 Sleep-Wake Disorder (Non-24) – cause the sleep-wake cycle to be out of sync with the day-night cycle. Some extreme “night owls” have DSWPD, which is a medical condition with multiple potential causes including a long intrinsic circadian period, reduced sensitivity to light, reduced melatonin production, or brain injury.

Some occurrences of DSWPD can be traced to a specific genetic cause. The CRY1 variant lengthens the circadian period in humans; people with this mutation fall asleep late and wake up later in the day. There are also other mutations in other circadian clock genes that alter the biological clock –  and sometimes disrupt the body’s daily rhythms.

Quality sleep consists of HOW much we sleep and WHEN we sleep and also getting the proper proportion and amount of each of the stages of sleep. Non-Rapid Eye Movement (NREM) sleep [which can be subdivided into Stages 1, 2 or 3 (from lightest to deepest sleep)] and REM sleep. During a sleep episode, a person switches multiple times between NREM and REM sleep.

Living on a “normal” person’s diurnal schedule causes people with DSWPD to suffer from chronic “jet lag”. Jet lag usually occurs when someone travels rapidly to a new time zone (i.e., new local clock time) while their circadian rhythms remain on the previous time zone. Therefore, external (i.e., wall clock)  and internal (i.e., circadian clock) times (and associated behaviors) are misaligned.  For people with DSWPD, the misalignment of internal physiological processes with “normal”-timed sleep/wake and other activities makes them feel unwell and fatigued. This can have serious consequences on all aspects of health including cognition, emotion regulation, metabolism and immunity.

When people with DSWPD have to wake up at 6 or 7 am for work or school, they not only do not obtain the appropriate total amount of sleep but they may also have less REM sleep, since REM sleep tends to occur more frequently and last longer as sleep episodes progresses. During REM sleep,  memories are consolidated and emotional regulation occurs.

But when they live according to their own body clocks, they may miss out on work, school and social opportunities as well as face disbelief and derision from family and friends.

Living against one’s body clock is detrimental to physical and mental health, especially over the long term. Awareness of CRSWDs and late chronotypes is desperately needed to bring about changes in attitudes and policies.

Improving diagnosis and increasing general awareness are essential for DSWPD  patients to request accommodations at work and school.

Screening for DSWPD needs to be improved and standardized. For example, when a patient complains of delayed sleep night after night – despite following sleep hygiene best practices – a clinician should consider DSWPD.

To diagnose DSWPD, a two-week (or longer) sleep log that tracks natural patterns of sleep and wakefulness is more effective than an overnight sleep study.

At-home DNA tests detect some of the genetic variants that predispose a person to delayed sleep. Hopefully, in the near future, a blood test, such as Time Signature, will become clinically available; it calculates a person’s circadian phase by measuring different gene expression markers. These tests will need to be validated using DSWPD populations before they are used clinically.

In addition to genetic testing, biomarkers such as cortisol and melatonin levels can help “validate” that DSWPD is a physiological – not psychological – disorder.

Frequently, doctors misdiagnose DSWPD patients with “chronic insomnia” – believing depression or anxiety is causing the inability to fall asleep. They prescribe antidepressants, such as the SSRI, Celexa (Citalopram), or hypnotics such as Xanax (Alprazolam) or Ambien (Zolpidem), which sedate patients temporarily, but can lead to dependency and therefore are not recommended for long-term use.

There is no “magic bullet” for treating DSWPD. Light therapy, melatonin, and melatonin agonists such as Hetlioz (Tasimelteon) can help some manage the condition. Patients report that the most effective way to cope with DSWPD is to adjust school, work and social schedules to accommodate their extremely delayed sleep onset and offset. A portion of the population (the exact percentage is still unclear) with DSWPD is not capable of changing their sleep onset time. Regardless of willpower, exposure to light, adjusting room temperature or the timing of meals, their chronotype is intractable: it’s not a lifestyle choice or preference.

“The early bird gets the worm” mindset and the 9-to-5-work day are outdated concepts. A person requesting a daily work schedule at a later phase – such as 11 am to 7 pm instead of 9 am to 5 pm – should not be considered lazy or unconscientious about their job.

When people live according to their body clocks, they perform their jobs better – working faster and making fewer mistakes.

The COVID-19 pandemic has demonstrated that many jobs can be accomplished remotely and with a flexible schedule. Some companies find that productivity stays the same or increases when employees work from their home offices. However, there is additional work involved in managing people who are not in the office and not working at the same time as others.

Although our economy is increasingly knowledge based, there are some positions, such as in education and healthcare, that require in-person attendance at a scheduled time. Sufferers of DSWPD should keep these realities in mind and choose careers carefully (if possible) to avoid problems with their managers and co-workers.

In conclusion, words matter – we need to change how we talk about sleep. Sleeping during later times such as 4 am to 11 am should be considered “having a late chronotype” – NOT “sleeping in,” and should NOT be a reflection on a person’s character. People with DSWPD are vital members of society who are asleep and awake at different times than others. Sleep must be prioritized as one of the three pillars of health – along with diet and exercise. it is essential to a person’s well being.

About the author: Alexandra Wharton is a board member and social media liaison for Circadian Sleep Disorders Network and the chapter leader for Start School Later – Texas. She writes and tweets at Delayed Sleeper (@DelayedSleeper) – which is a personal account of living with Delayed Sleep Phase Disorder.