Many of us often choose to sacrifice sleep to either do extra work or enjoy night life activities. No matter which one it is, we usually feel that making up the lost sleep later will put our bodies right again. Well… although this may help relieve some sleep debt, disrupting your circadian rhythm too often may lead to health problems, including cancer.

Cancer has been considered a disease of old age. But more and more young people without inherited cancer-causing mutations are diagnosed with cancers. Why? The truth is that it is hard to know exactly why some people develop cancers but others don’t. Luckily, epidemiological studies on large groups of people and basic medical research using human cell lines and animal models have identified risk factors which may increase one’s risk to develop cancer. Some examples include exposure to agents that damage DNA (e.g., tobacco and cigarette smoke, UV light), poor diet or obesity. While most of us have been admonished to avoid all of these things, it is perhaps not as well known that circadian disruption is also a cancer risk factor. Studies in humans and animals have shown that activities that lead to long-term circadian disruption such as jet lag, shift work, sleep disruption, and exposure to light at night can increase risk of developing prostate, breast, colorectal, liver, pancreas, ovary, and lung cancers. Night shift work, which involves circadian disruption, has been classified as a probable human carcinogen by the International Agency for Research on Cancer (IARC) of the World Health Organization (WHO).

But why are irregular sleep schedules or light exposure at night linked to cancer development? To understand that, one must appreciate how central circadian rhythms are to bodily function. Circadian rhythms are controlled by an essential time-keeping molecular mechanism, a.k.a. the circadian clock. The master clock, which is located in a tiny region at the base of the brain, synchronizes the circadian clock with environmental cues, such as light. The master clock also coordinates the activity of peripheral tissue clocks which function in all the major organs. This coordination regulates not only sleep-wake cycles, but also fundamental biological processes including hormone oscillation, metabolism and immune function. Irregular exposure to light can disrupt the coordination between the master clock and the peripheral clocks, which may lead to health issues such as hormonal imbalance or systemic inflammation. Abnormal hormone levels in turn dysregulate cell division needed to renew and maintain various tissues. Systemic inflammation can allow cells to accumulate mutations and let these abnormal cells survive and multiply. The latter can then be further promoted by hormone imbalance. Together, all of these changes that originate from disrupted circadian cycles can increase cancer risk. 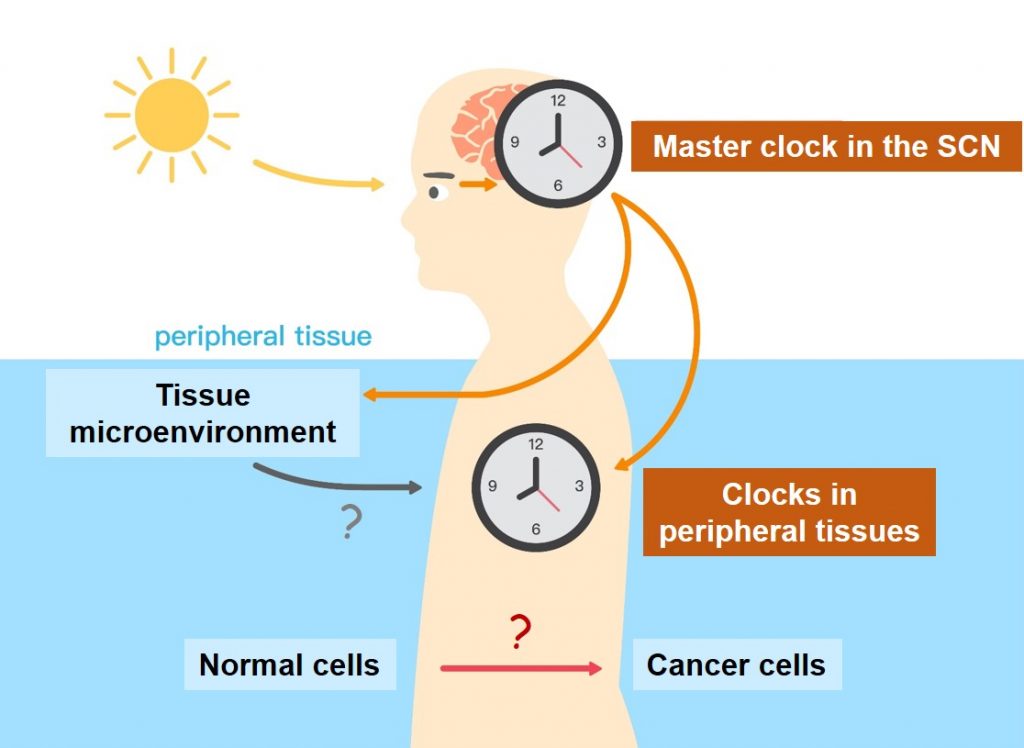 Circadian disruption can also change cells “from the inside” and allow them to gain the ability to form tumors. Inside a cell, a group of genes is responsible for the time-keeping mechanism to keep the clock running. These core clock genes (one of which is actually called CLOCK, along with other genes called BMAL, PER and CRY) form a system of checks and balances on each other that serve as the molecular basis of circadian rhythms in humans. The activities of many other genes are controlled by these circadian clock genes to ensure that biological processes, including cell proliferation, tissue differentiation, DNA repair and cell migration, happen at the right times. Some of these many circadian controlled genes have anti-tumor functions, while others have cancer promoting abilities. Therefore, dysregulation of the core clock genes and the genes under the clock-control umbrella can promote tumorigenic activities in cells.

Most cancer cells have a malfunctioning circadian clock and have improper expression of clock and clock-controlled genes. This phenomenon offers researchers an opportunity to investigate the possibility of “cancer chronotherapy”. The idea of cancer chronotherapy is to determine a specific time window to administer anti-cancer drugs to not only achieve the best efficacy to kill cancer cells, but also to minimize the unwanted adverse effects on normal cells in the rest of the body.

Many cancer risk factors are out of our personal control. But, maintaining regular sleep-wake times as part of a healthy lifestyle is something that we often can control. Not only will you avoid waking up grumpy, you can also help keep your cells in good shape.

About the author: Wendy Hwang-Verslues, PhD, is a researcher at Academia Sinica in Taiwan.  Long term goals of her laboratory are to decipher the links among circadian rhythm, core clock gene functions and stem cell (SC) fate/characteristics in tissue development and cancer progression. You can find her on Twitter (@HwangVerslues).

Image credits: Adopted and modified from the author’s website (with permission).