By Diego Golombek on July 9, 2019 in Clocks in the Spotlight 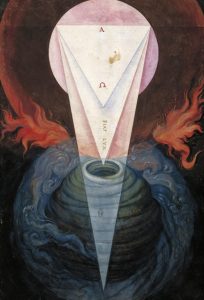 An artist must possess Nature. He must identify himself with her rhythm, by efforts that will prepare the mastery which will later enable him to express himself in his own language. Henri Matisse

The rhythm of relations of color and size makes the absolute appear in the relativity of time and space. Piet Mondrian

Rhythm is God. I think, without rhythm, you can’t create – there is no art. Alejandro Gonzalez Inarritu

In Ovid’s Metamorphoses we learn that the nymph Clythie falls in love with Helios/Apollo, the sun-god, who apparently does not pay much attention to her – while probably flirting with most creatures under the sun. Clythie loses her mind and starts following Helios along the sky until she slowly transforms into… a heliotrope (or sunflower). Voilá, mythological circadian rhythms are born.

Upon turning our heads to the sky and becoming fascinated with the movements of the stars and the planets, we also become intoxicated with cycles and suddenly find them all over nature – including ourselves. We try to make sense of them, interpret the fast and slow revolutions of the spheres and of our brains. And that’s exactly what artists (and scientists) do: try to make sense of a senseless world, steal secrets from nature until we domesticate them and, who knows, get some answers. But a good scientific (and artistic) answer never closes doors: on the contrary – as in the Beatles world of Yellow Submarine – they open new questions and portals in a never-ending quest. Cycles have always fuelled our imagination and we have tried to represent them in every possible way, maybe to conquer their mysteries. Take ancient cave paintings, for example: there are horses running, fires and darkness, suns and moons, days and nights. Cycles.

There are many worlds out there as there are seasons or hours of the day. We can find them beautifully depicted in Claude Monet’s series of paintings of Rouen’s Cathedral (1892-1894), 31 paintings that make art capable of representing the dynamics of light and darkness, the subtle changes in the air that occur throughout the year: maybe for the first occasion a picture can capture the fourth dimension – time. There are many cathedrals in Rouen: one for dawn, another one for noon, maybe a couple for dusk, and so on. Isn’t this similar to stating that we have several bodies throughout the day?

Of course, light is the primary fuel for visual artists. As Leonardo da Vinci stated, “A painter should begin every canvas with a wash of black, because all things in nature are dark except where exposed by the light.” Yes, just like the SCN, the primary body circadian clock, gets entrained by light…

Artists themselves depend on their body rhythms. Natural cycles seem to affect the production of art: they make us move in mysterious ways. Artists talk about rising tides of creativity (“the tide in the affairs of men”, which, according to Shakespeare, “taken at the flood, leads on to fortune”) with miracles suddenly happening without warning, even at 2 am (quoted from here). Chronotypes, the tendency towards morning or evening preferences and activities, also shape the artist’s will, and can certainly change the way we experience the world and, ultimately, represent it on canvas, screens or minds.

Indeed, modern artists are paying much attention to temporal dynamics. In the kinetic chandelier aptly named “Circadian”, light varies throughout the day according to circadian principles. In the 12-hour long chroreography “Exploring the now” dancers represent the body clock throughout the day, with different musicians arriving at hourly intervals adding new musical layers.  Filmmakers have usually shown 24-hour stories in the life of their characters – even with recurrent cycles, like in Groundhog Day among many others.