By Jonathan Sobel, PhD on September 23, 2019 in Clocks in the Spotlight

In 1729, Jean-Jacques d’Ortus de Mairan (1678-1771) laid the foundations of modern chronobiology. A French interdisciplinary researcher, he designed an experiment that demonstrated the existence of a circadian rhythm in plants, potentially deriving from an endogenous clock. These observations and experiments led to the development of chronobiology. 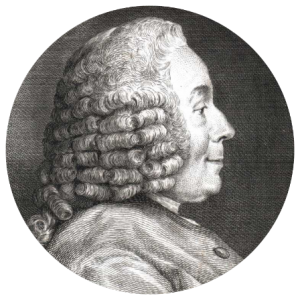 This research, performed by de Mairan and presented by his colleague Marchant at the Royal Academy of Science, suggested the existence of an endogenous biological rhythm [1]. Their observations, it turned out, contained the seed of modern chronobiology. Mairan showed that light is not necessary for the oscillations of Mimosa pudica‘s leaves and branches along the day/night cycle; these oscillations persist in the absence of light. However, de Mairan and Marchant were quite careful with their interpretation of the ability of plants to measure time, as they could not rule out other potential confounding factors such as temperature cycles, light leaks, or changes in other meteorological parameters. In addition, they already suggested to investigate the influence of temperature on plant rhythms using an incubator, and proposed a modern experimental design with day/night inversion.

“It may have a probable connection with the ability of sick people to differentiate day and night from their bed.”

“The experiment was done during the summer and was repeated well.”

The authors were concerned about the repeatability of the phenomena, a prerequisite of both the scientific method and modern statistical thinking. However, the paper does not provide detailed “materials and methods,” so we cannot know if “well repeated” implies that the experiment was done a few times for a day or two, or if the same plants were studied over many days. We have no information on the time resolution (how often the researcher checked the plants). Indeed, de Mairan did not detect that the plants opened up their leaves a little earlier each day. This phenomenon is described today as a “free-running” rhythm (non-entrained by external cues) with a period slightly shorter than 24 hours, which is strong evidence that the rhythm is endogenous. Indeed, a Swiss botanist by the name of Augustin Pyramus de Candolle characterized the free running period of Mimosa pudica in 1832 and found it to be 22.5 hours, substantially shorter than 24 hours.

“He simply invites botanists and physicists [natural philosophers] to find themselves other things to follow.”

As de Mairan’s schedule was packed with many other fields of research (e.g., astronomy), and his responsibilities at the Academie Royale des Sciences, he did not want to invest his time in writing and publishing a paper on a “mere plant.”  Thus his experiment was reported by his colleague Marchant. Similarly, de Mairan invites other scientists (“botanists and physicists”) to follow up on these experiments. Many scientists from different backgrounds, such as mathematics, biophysics, bioinformatics/computational biology, chemistry, medicine, and more, accepted this invitation and enriched the development of chronobiology.

Finally, Marchant and de Mairan concluded the essay by saying that true science is experimental and a very slow process. Indeed, nearly 300 years after his observation, the field of chronobiology is still in progress, and three of its main contributors, namely Jeffrey Hall, Michael Rosbash, and Michael Young, received the Nobel Prize in 2017 for their characterization of the molecular circadian clock.

[1] For a translation of the original text and a more elaborate interpretation, see: https://jonathansobel1.wordpress.com/2019/03/14/botanical-observation/