By Diego Golombek on September 3, 2019 in Clocks in the Spotlight 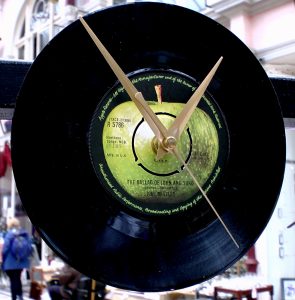 Rhythm is something you either have or don’t have, but when you have it, you have it all over.

“The mathematics of rhythm are universal. They don’t belong to any particular culture.”

Try this experiment: listen to Ravel’s Boléro from the beginning to the end. It does keep getting faster and faster, right? Well… no. It’s an auditory illusion: it does get louder, though, and as the volume increases so does our perception of speed.

Indeed, music is the best way for experimenting with rhythms and cycles: after all, music is rhythm and melody.

But besides this rather obvious connection with rhythmicity in general, it is perplexing that the topics of sleep and even circadian rhythms are quite pervasive in popular music lyrics. Yes, there’s even a band called Circadian Rhythms! (Well, two, actually, Circadian Rhythm and Circadian Rhythms). So what’s so fascinating about the term “circadian” that illustrates titles from different bands, from Deathpact to Son Volt, from Silversun Pickups to Song-Min An? [1]

Circadian rhythms have even inspired a full – albeit minimalist – percussion composition by Carolyn Bremer (an excerpt can be heard here). Of course, nothing beats sleep as an inspiring theme, like in R.E.M.’s Daysleeper (and, indeed, the band’s name also sounds familiar, right) or Bon Jovi’s “I’ll sleep when I’m dead” among many, many others.

But musicians also beat to their biological clock’s rhythms. According to research published in 2013 by Van Vugt and colleagues, music playing performance by pianists is affected by both chronotypes – i.e., morning or evening types – and time of day. As Frank Zappa famously said, “without music to decorate it, time is just a bunch of boring production deadlines or dates by which bills must be paid”. And we love time, and we love music. But it’s really been a hard day’s night, we should all be sleeping like logs.

[1]  I am grateful to Dr. John Hogenesch for some of these suggestions.