By Milena Schonke, PhD on October 15, 2019 in Clocks in the Spotlight

Have you ever ditched a gym class or a workout session due to the lack of time and felt guilty about it? We all know that exercise is healthy as it lowers the risk for cardiometabolic as well as neurodegenerative diseases – yet it is hard to make time for it. Could we make the most out of every training bout that we do find the time for and maximize the health benefits by exercising at the “right” time of the day? And what is the healthiest time to exercise? 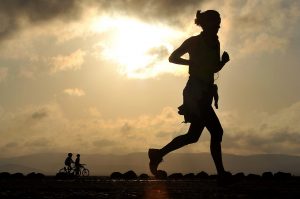 Our biological clock usually keeps a tight control over the energy usage and storage in the body, but is influenced by external cues like food intake – and physical activity. During exercise, active skeletal muscle takes up fat and sugar from the blood and other tissues such as the liver and fat tissue help out with providing these fuels needed for prolonged activity. Nevertheless, the muscle still relies on the biological clock as its regular uptake of energy is primed to take place at the times we usually eat – and not in the middle of the night when we (ideally) do not eat. Indeed, when we trained mice at different times of day (and night) we observed a distinct molecular response to exercise depending on the time since the last meal. Mice that ran early during the day (referring to their resting period as they are nocturnal animals) relied more on the sugar they got from their last meal prior to the exercise while the early night-time runners, just after waking up, had to dig deeper into stored fuels. These nearly fasted mice struggled a lot more with the run, an effect that can also be seen in humans as only 18% of regular runners readily jump to action straight out of bed.

But which one is ultimately better, the early run before breakfast or the gym session at the end of the day? Already in the 1980s and 90s it was reported that the muscle strength of athletes is the lowest in the morning and peaks in the late afternoon and evening and that runners were consistently faster later in the day, suggesting that sporting events should be scheduled accordingly in the chase for new records. Decades later we understood that this effect may be caused by an increased capacity of mitochondria, the cell machinery we need for energy production, in the evening. Is the Olympic motto “Faster, Higher, Stronger” the best to look at when we talk about the health benefits of exercise, though? Maybe not. However, even in untrained, middle-aged men with type 2 diabetes that performed intense cycling either in the morning or in the afternoon as part of a study, the timing mattered as only afternoon exercise was able to lower blood glucose levels.

The long-term effects of exercise at different times of day on human health are difficult to study as metabolic diseases often develop over decades and are influenced by a myriad of other factors than training routines. It may, therefore, take a little while until we can give a definitive answer to the question “When should I exercise?”. Until we get there the current recommendation stands: Whenever you find the time!